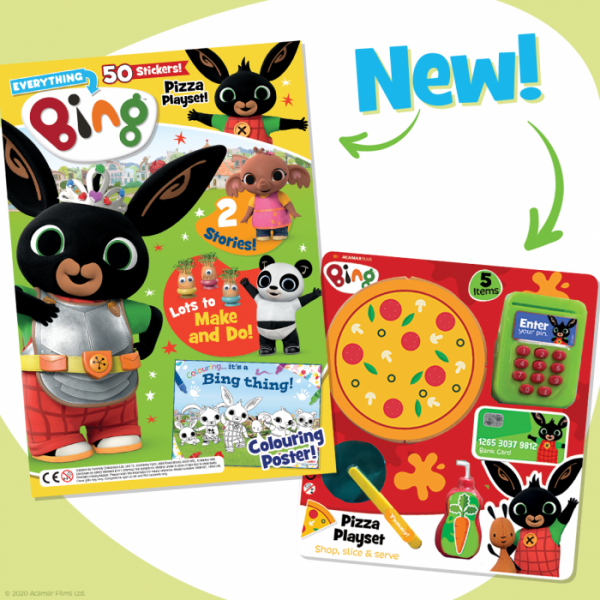 Bing bounds for success in 2020 with a strong magazine programme in the UK including a Kennedy Publishing one-shot in store now until March 19 and a Redan stand-alone monthly magazine launching in July.

Out now, Kennedy Publishing’s Everything Bing is a one-shot stand-alone magazine bursting with Everything Bing! Activities include making eggy heads, baking bunny biscuits, colouring, counting, matching and more. As well as a giant double-sided poster to pull out and keep, Everything Bing comes with a fun 5-piece pizza playset and 50 colourful stickers.

Redan’s monthly magazine, Fun To Learn Bing, will launch in July. Every themed issue will include a story, interactive activities, recipes, crafts, a 12-page workbook with a cut-out Certificate of Fun, a letters page and lots of stickers which are integral to the activities within the magazine. Each £3.99 issue will also come with a Bing branded covermount gift.

Along with the new stand-alone magazines, Bing will also continue to make a regular appearance in both Redan’s Fun To Learn Friends and Immediate Media’s CBeebies Magazine.

Natalie Harvey, Executive Director of Sales at Acamar Films said: “We’re delighted that Bing’s success last year in magazines, and generally with the debut of the new series and master toy launch, has led to a strong roll-out in 2020. Bing is going from strength to strength in the UK and we’re committed to creating quality content in all forms, including magazines, for our Bing fans and their grown-ups.”

In addition to magazines, Bing is set for a big year in books securing a spot as the only licensed character for World Book Day. Bing’s Splashy Story can be redeemed for free with a £1 World Book Day token, more than 15 million of which are being distributed across the UK and Ireland by World Book Day partners.

Team Bing will be at MIPCOM Online+ next week! Please get in touch if you’d like to talk to us – search for “Acamar Films” or use this URL if you have an event account: https://matchmaking.grip.events/mipcomonlineplus/app/profile/3921881

We're very happy to be continuing our Italian success, signing a new deal with our beloved partner Rai! http://www.acamarfilms.com/bings-italian-success-continues-with-new-rai-broadcast-deal/