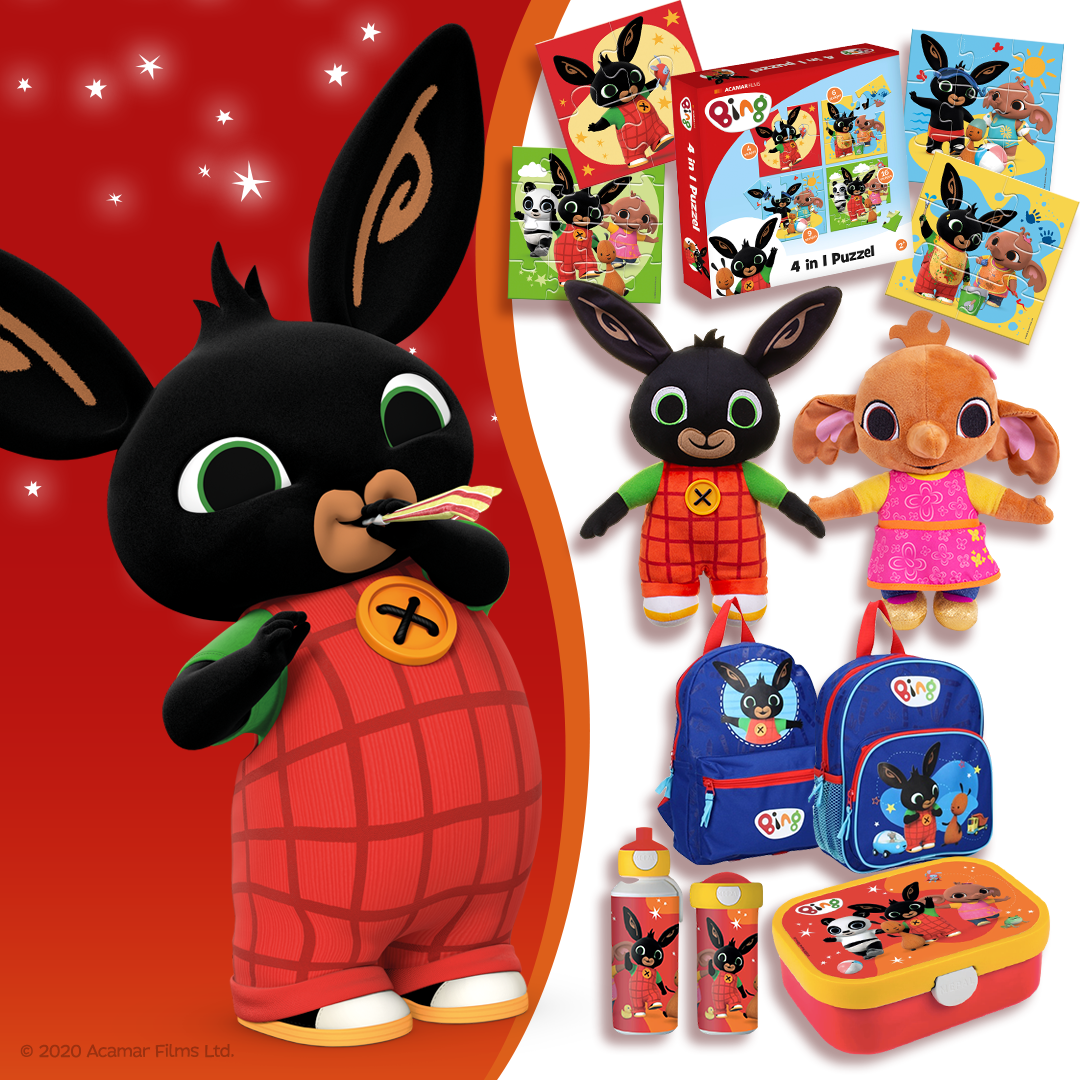 Acamar Films’ hit pre-school show Bing is proving a huge success in the Benelux region and its growth is set to soar even further, with a new raft of licensing and broadcast deals announced today. This follows the recent news that Acamar Films has signed on leading Dutch theatre production company Trend Media to bring Bing to life on stage in the Netherlands and Belgium for the very first time.

In a new broadcast deal, Ketnet (the current broadcaster of Bing in Belgium) has purchased the rights to the newest series of Bing, Series 4. The 26 episodes will be in Flemish with a premiere date to be announced. In the Netherlands, all 104 episodes of Bing Series 1-4 are already available on NPO Zappelin.

Thanks to Acamar Films and its Benelux agent License Connections’ dedicated focus, Bing is enjoying rapid growth and momentum. Following the success of the core toy launch in AW 2019, Bing’s Homeware, Publishing and Toy & Games ancillary categories have expanded with new and extended licensing deals.

The new partners are John, Big Balloon and Mepal, with John’s toy range including Bing playing balls due to launch SS 2021 and Big Balloon launching Bing magazines in Q4 2020. Mepal is the #1 brand and market leader in Benelux for melamine lunchboxes and drinking cups and will launch the Bing collection in AW 2020.

These deals are in addition to current partners Vadobag for bags and Aymax for bedding who have been on board since the beginning of the Bing licensing programme in the Benelux region.

Spectron, the local distributor for Golden Bear, have increased their listings to include Belgium following the huge success of the AW 2019 and SS 2020 launches in the Netherlands, where all toy products sold out within a few weeks. Spectron will be TV advertising to support the AW 2020 range.

John Boeyen, Owner/Managing Director, Spectron, said: “For us, Bing is the fastest growing pre-school brand in the Benelux region. Our toy range was a huge hit in the Netherlands and we are excited to be bringing them to Bingsters in Belgium this autumn, where we are sure they will prove just as popular.”

Daphne Kellerman, Founder of License Connection, said: “We are thrilled with the growing success of Bing in Benelux. Bing has really established itself in our local market and has been embraced by both retailers and consumers. We look forward to working very closely with the Acamar team and our local licensees over the coming months, with a particular interest to develop Health & Beauty, Electronic Learning and Wheeled products.”

Acamar Films will be exhibiting, with a virtual Bing booth, at the Festival of Licensing during the European-focused week, 6-8 October 2020. Search for “Acamar Films” or “Bing” in the exhibitor directory.

Woohoo! @bingbunny has two episodes in the @BBCiPlayer list of Top 10 episodes of 2020. Another great year and testament to the many young children enjoying Bing’s meaningful, authentic and relatable stories.