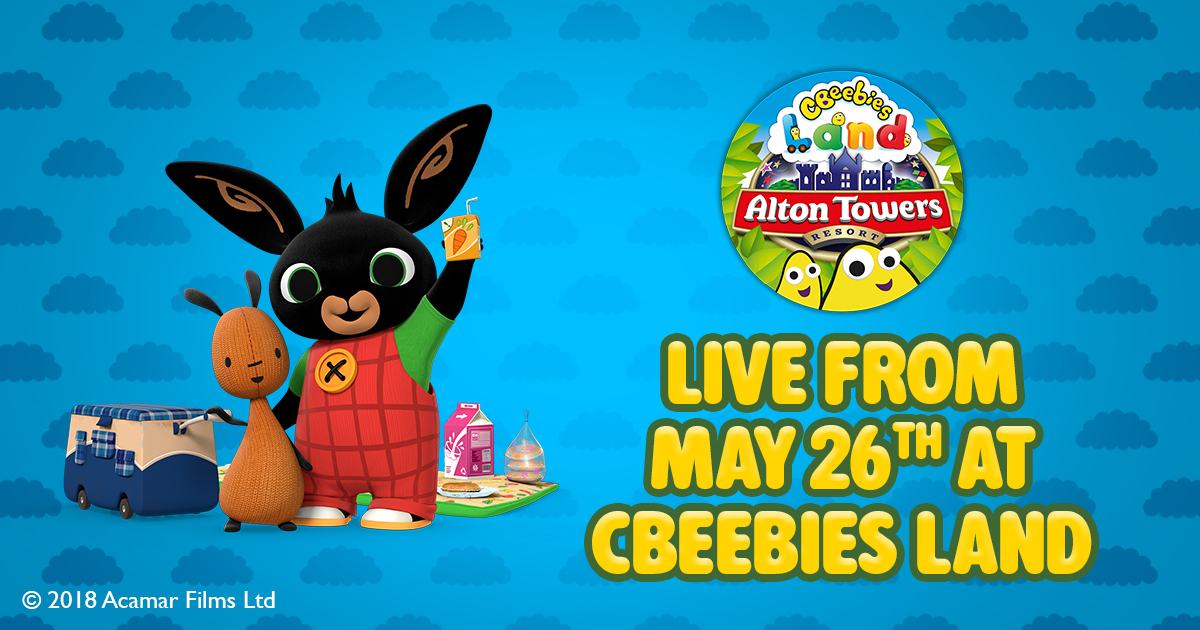 CBeebies Land at Alton Towers Resort is to welcome much-loved star Bing to Big Fun Showtime, in a brand new daily live show that will get youngsters bopping with excitement.

From Saturday, May 26th, fans of the CBeebies series will get to see Bing and Flop in “Bing’s Picnic”, a new, live, daily show  within Big Fun Show Time that sees Bing and Flop on an exciting day out at CBeebies Land. Bingsters can join them as they have their picnic, play games and make some new friends.

The interactive, fun-packed performances will take place at 1.15pm and 3.15pm each day and include games for young guests to get involved with as they help Bing and Flop prepare for their theme park adventure. Following the show, guests will also get the opportunity to take a selfie with Bing and Flop.

”Bing’s Picnic” will join the line-up of daily live shows in Big Fun Show Time, an entertainment and picnic space at the heart of CBeebies Land in Alton Towers Theme Park. Guests will also get the chance to join Hey Duggee, as he tries to achieve his Big Day Out badge, and the Funsters as they encourage learning through play in a range of fun-packed activities including singing, dance, sports and more.

CBeebies Land, within the theme park, is an interactive area for young children to learn and play featuring rides, attractions, live shows and meet and greets with characters from the hit channel.

Chris Carter, Head of Entertainments at Alton Towers Resort, said: “We are incredibly excited to have Bing and Flop join their CBeebies co-stars. Bing has been a resident at the CBeebies Land Hotel since last summer and been a huge hit with our guests.

“Now Bing and Flop will be taking centre stage with his own live show in Big Fun Show Time each day for Bingsters and their families to enjoy. It’s yet another fantastic addition to CBeebies Land as it continues to dazzle and delight young families as they meet and interact with some of CBeebies’ biggest stars.”

Last year Alton Towers Resort opened the UK’s only CBeebies Land Hotel uniquely designed for young families, bursting with music, stories and adventures for little ones to enjoy. The Hotel has 76 bedrooms featuring In the Night Garden, Octonauts, Postman Pat, as well as Swashbuckle and Something Special.  Guests can hunt for Pat’s parcels, count the jewels in the Swashbuckle room, stay in one of Mr Tumble’s starry bunkbeds or find the Pontipines around the In the Night Garden room, as well as sleep in the Octopod thanks to an underwater themed experience with the Octonauts. Featuring interactive games and play items, each themed room is uniquely designed to give little ones a sleepover like no other!

Bing and Flop will appear each day at 1.15pm and 3.15pm for families to enjoy in Big Fun Show Time at CBeebies Land, within Alton Towers Resort, from Saturday, May 26th 2018. More information about CBeebies Land can be found here: www.altontowers.com/cbeebies-land.

Earlier this year Alton Towers Resort also unveiled the first Season Pass for the theme park, allowing visitors to pay once and come back all season for free*. With over 50 rides and attractions, the Season Pass offers great value for money, whether you are seeking family fun or pure adrenalin-fueled experiences, there is something for everyone to enjoy.

2018 sees the launch of Wicker Man – bringing together cutting edge special effects with classic wooden coaster technology for the first time!  Wicker Man is the UK’s first new wooden coaster built in over 20 years and joins an amazing line-up of world-class rollercoasters including Galactica, Nemesis, Oblivion, The Smiler and Rita! Alton Towers Resort is Britain’s Greatest Escape with lots of amazing rides and attractions for thrill-seekers, families and kids of all ages!

Produced by Acamar Films, with Dublin-based studio Brown Bag Films, Bing has seen extraordinary success since it launched in 2014. Adapted for television from the original books by Ted Dewan, Bing celebrates the joyful, messy reality of pre-school life and finds the big stories in the little moments.  A ratings hit on CBeebies in the UK, Bing is the number one top rated pre-school show on CBeebies and the BBC iPlayer. Bing is also the number two most requested show on the iPlayer across the entirety of the BBC.  The series boasts an impressive voice cast including: Academy Award-winning Sir Mark Rylance (Bridge of Spies, Wolf Hall, The BFG) as Flop; Akiya Henry (Holby City) as Amma; Pauline McLynn (Father Ted) as Gilly, and Bryony Hannah (Call the Midwife) as Padget.www.bingbunny.com

Acamar Films is an independent production company based in London which produces, distributes, markets and licenses its international award-winning preschool animated series Bing. The company was founded in 2005 to create and produce film and television projects to “move and delight audiences worldwide”. Its Emmy-Award winning, BAFTA nominated, CEO, Mikael Shields has over 30 years’ experience and an international reputation for identifying, developing, financing and producing a wide range of hit film and television projects including Nick Park’s Oscar and BAFTA winning Wallace & Gromit, Aardman’s Rex The Runt, Candy Guard’s Pond Life, Pingu, Noddy, BAFTA winner Hilltop Hospital and Flatworld. Prior to co-founding Acamar he has held senior management positions at the BBC, EVA Entertainment, Pearson, Atom Films and Ealing Studios.  Visit us at www.acamarfilms.com

Back
Tweets by ‎@AcamarFilms
February 4, 2020

Bing and Flop have had lots of fun and a great start to the year with our licensees @GoldenBearToys,… t.co/a9cXldAhFb