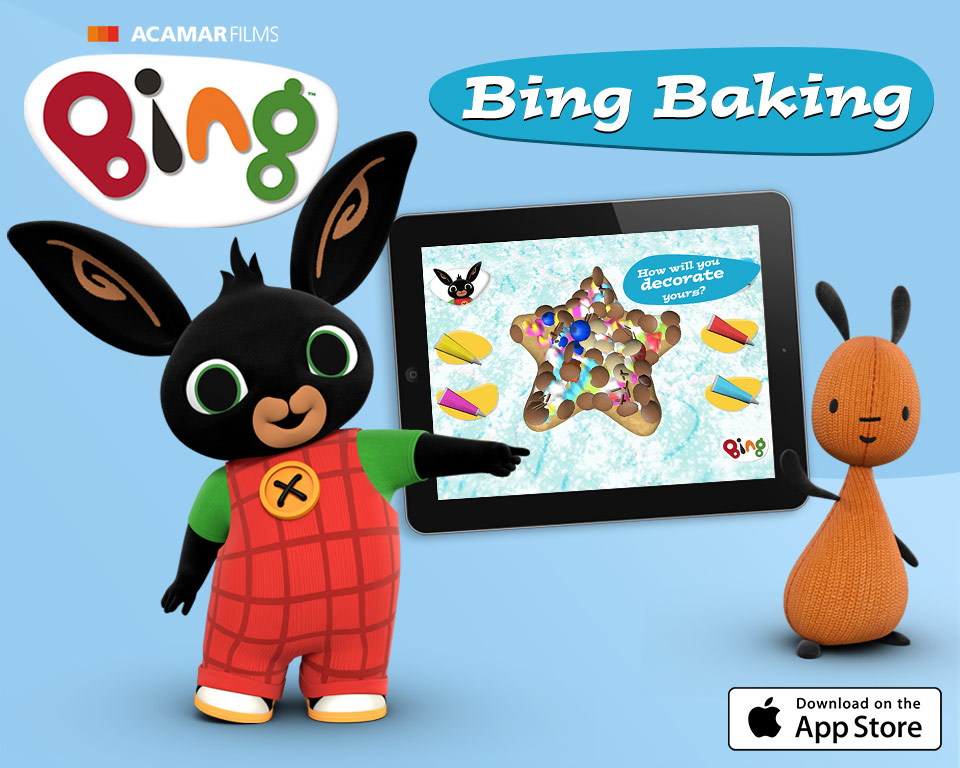 Available on all mobile platforms.

London, 14 July 2016: Acamar Films is launching it’s first ever Bing app based on its award-winning television series. The brand new app – Bing Baking – has been produced by Acamar Films and co-developed with the digital team at Aardman. It’s a game-based format designed and specially animated by Aardman’s digital team which encourages creativity and curiosity through play.

Grown-ups love Bing. Children love, love, love Bing and this app allows them to be a part of Bing’s world, playing alongside Bing and Flop in their kitchen. This is the first in a new series of Bing digital content aimed specifically at preschoolers, and the grown-ups in their lives, and will be available on all mobile platforms (the AppStore, from 14th July 2016 and Google Play and Amazon from 11th August 2016).

This app celebrates creativity. For preschoolers baking is precious shared time with a grown-up; it is a blend of tactile creativity, chemistry, alchemy and art. Bing Baking gives Bingsters the freedom to make their own choices. Alongside Bing and Flop, in their lovely kitchen, little ones can roll the first ever realistic ‘digital dough’ neatly with a rolling pin or squish it with their hands; choose from a variety of biscuit cutters and tap Flop to put their biscuits in the oven; keep an eye on Chicky Timer to let Flop know when it’s time to take the biscuits out; decorate them their own way with lots of icing, sprinkles, chocolate drops and fruit; take a photo of Bing and Flop with their creations; and finally eat their own yummy-delicious biscuits with Bing – nom nom nom!

Bing digital apps, like the original Bing TV episodes, revolve around the ‘microdramas’ of preschool life where both the ups and downs are celebrated as part of this authentic journey. Bing Baking certainly celebrates the joyful, messy reality of pre-school life. It’s no big thing when Bing burns his biscuits, for example. He might not be able to eat them but he can still decorate them.

Steph Gauld, Head of Digital at Acamar Films comments: “Children have already welcomed Bing wholeheartedly into their lives through our television series, our DVDs, toys and games and also increasingly online via www.bingbunny.com. We wanted to find a way to help them immerse themselves in Bing’s world and this app allows that to happen. Each child can play alongside Bing and Flop with a simple intuitive interface designed to encourage creativity and play. Aardman has been the perfect partner for us and we’re genuinely excited to be launching our first Bing app together.”

Aardman’s Finbar Hawkins, producer on the Bing Baking app adds: “Working with Acamar to bring Bing to interactive life has been a special thing indeed. Our two companies share a heartfelt passion for quality and precision in the crafting of children’s entertainment. We were delighted that Acamar embraced our ‘sandbox’ ideas for the app, meaning that together we’ve created an immersive and tactile environment for young bakers to have fun, learn and play.”

Bing’s range of digital content will build upon the co-viewing objectives of the Bing television series, inviting children into Bing’s world to play together with him and his friends. This digital content is the latest in a range of carefully crafted Bing offerings designed to delight pre-school children along with toys from Fisher-Price, games from Ravensburger, greetings cards from Woodmansterne, books from HarperCollins and DVDs from Studiocanal.

Aardman Digital is the interactive division of the multi-award winning studios of Aardman Animations. Combining access to world-class directors, animators and story-writers with passionate creative minds, technical wizards and gaming geeks they bring the Aardman entertainment values to the propositions of external clients and partners. Aardman Digital has a wealth of experience in creating engaging online and mobile games, websites and social media campaigns for both entertainment purposes and combining integral learning objectives, for family audiences across a range of abilities.